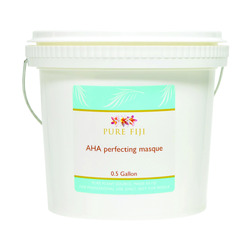 The AHA Perfecting masque is a cocktail of several fruit acids and salicylic acid. AHA’s diminish the thickness of the stratum corneum by reducing corneocyte cohesion. By this, the alpha hydroxy acids have a positive function in removing dead cells from the upper skin. Dead cells block the pores and hinder moisturization and hydration. The mild peeling effect followed by moisturization and hydration help in repairing damaged tissue, resulting in a fresh,brighter complexion.